Kratos has gone from being a Spartan Warrior, son of Zeus, to a bona fide god. He climbed Mount Olympus to kill his father, and then defeated the Titans. What’s left to do when a man has already accomplished so much in life? Move somewhere that no one has heard your name, like the middle of the woods, with a new woman and raise a son with her. That is the first impression the player will take away when first starting God of War for PS4, developed by SIE Santa Monica Studio and published by Sony Interactive Entertainment.

Except, we know happy endings are short lived when Kratos is involved. Before long, he begins his journey to travel to the top of the highest mountain and scatter ashes. At his side will be his trusted companion, Atreus, a curious boy equipped with a bow. Kratos can aim and command the boy to shoot an arrow at an enemy. Since we all know Kratos is a man of brawn who greatly dislikes gods because of past experiences, he relies on Atreus’s knowledge of the Norse gods and ability to read to guide him on their quest. Kratos might need to teach Atreus a few things about being a warrior along the way, but he will need to learn a thing or two as well if they hope to accomplish their mission.

Kratos abandons the Blades of Chaos for a while to wield a Leviathan Axe.  that is as much a tool as it is a weapon. The axe can be thrown to attack and then recalled, causing damage on the way back through if it impacts any enemies, or used to help solve puzzles. The Leviathan Axe is only the main hand weapon. For his off hand, Kratos wields a shield that expands from a gauntlet device on his left arm. Timing a block just right will stun enemies. Spartan mode returns, transforming Kratos into a powerful brawler that heals with every punch. The Leviathan Axe, bow, and armor are all upgradeable using runes. Trust me, you will need to upgrade. Battle in this game is as brutal as we have come to expect from God of War. One complaint to note is the initial controller scheme which has the player attacking with R1 and R2. This was extremely difficult because it was so different from traditional controls. I opted to change the controller settings to attack with triangle and and square instead.

There are two key elements that help God of War shine as a video game. First is the design of the camera angle from which the story is told. God of War was traditionally done from a fixed angle, something from a distance to see all enemies. This time the player experiences the world from Kratos’s point of view, over his shoulder with a limited range of movement to look left and right. Battle becomes difficult to know the location of all enemies but an indicator is provided to let the player know the direction they are approaching from. That also means doing quite a bit of exploring to discover all the hidden chests in alcoves and on ledges to locate all the collectibles and runes.  The second element is the flawless, fluid transition from from gameplay to cinematic. Sometimes a cinematic is triggered when Kratos opens a door, as if pressing circle started the cut scene. Other times one will begin just by reaching a certain point in the woods and I only know because my control of Kratos becomes limited or is completely removed.

That transition would not be possible without the incredible graphics brought to us with God of War. The series has always been known for its smooth gameplay but visually this game is stunning and showcases the ability of the PS4 processor. The scenery is lifelike. Thought was given to every detail, from the living, breathing forest, to the slightest eye movement that reveals an expression of emotion from the stoic Kratos. The voice acting was just as immersive as the environment. Kratos and Atreus carry on conversations along the way, sometimes about a recent event or because the boy likes to ask a lot of questions, most of which Kratos is short about answering if he responds at all. The banter frequently acted as a signal that indicates to the player they are moving in the proper direction to complete an active quest.

No one expected Kratos to be such an amazing father, but the interactions between him and his son nearly brought me to tears of endearment on several occasions. Smooth transitions between gameplay and cinematic made me feel like I never stopped playing the game, or like I watched a movie that was heavily interactive. God of War released on April 20, 2018 and as a fan of the series I could not wait to see what trouble Kratos would be getting into this time. I was not disappointed. This game is truly a great experience. 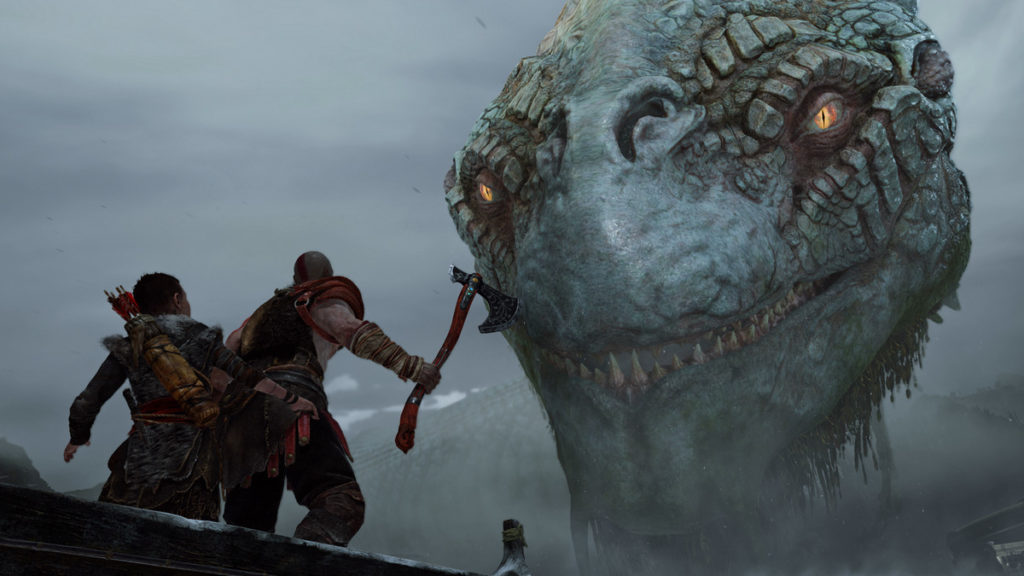