Nintendo Switch players will be able to play Vigor for free later in 2020, but Outlanders can become Founders and jump into this engaging multiplayer experience this summer.

Last week’s closed beta for Vigor was a successful test on the Nintendo Switch and Bohemia Interactive is now proud to announce that Vigor will be first available on the platform via the Founder’s Pack this summer. The Switch version of Vigor will then go free-to-play later in 2020. 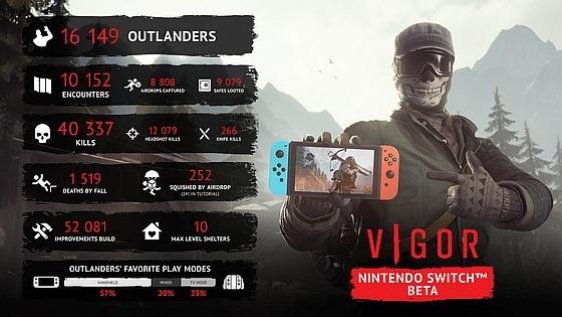 Based on the Nintendo Switch closed beta, the Vigor team is hard at work on improvements and fixes which came out of the feedback from players. Progress there and the test’s results are why the team is confidently giving early access to Switch players this summer via the Founder’s Pack. The $20 pack includes $40 worth of in-game currency, along with a special outfit, hat, and gesture that which will set them apart from the rush of Outlanders that arrive on Switch later in 2020.

Over 16,000 players played Vigor during the Nintendo Switch closed beta. They captured more than 8,000 airdrops and 252 of them managed to get inexplicably squished by airdrops. The Vigor team at Bohemia sends a huge thanks to every Outlander who participated and provided feedback on Facebook, Discord, and the evaluation form.