SQUARE ENIX® announced that Trials of Mana™, the full-3D remake of the beloved classic, will receive a patch update today, bringing new challenges and experiences to players. This update is in celebration of the recent 25th anniversary of the release of the original Trials of Mana, known as Seiken Densetsu 3 in Japan. Additionally, SQUARE ENIX is holding sales on digital versions of titles in the series.

Patch 1.1.0 for Trials of Mana is scheduled for release today and will include a number of game content updates and additions, such as: 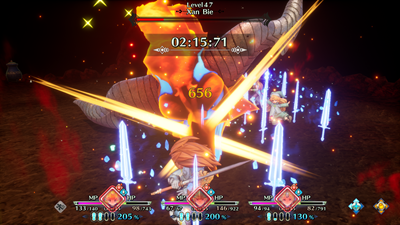 Players who complete the story available after completing the “No Future” difficulty mode will be rewarded with the “Rabite Slippers” equipment, which will allow players to traverse fields and dungeons without encountering enemies. In celebration of the 25th anniversary of the original Trials of Mana, select digital download titles in the Mana series will be available at a discounted price on Nintendo Switch™ and Steam® from October 14 through November 2, and on the PlayStation®4 computer entertainment system later this month.

Additionally, Trials of Mana fans are encouraged to share their love of the game with friends and coworkers with a special set of Zoom backgrounds, available to download for free. The set of five backgrounds includes a variety of Trials of Mana artwork and character illustration, and can be downloaded here: https://sqex.link/8a2e5.

For additional activities celebrating the 25th anniversary of Trials of Mana and details on forthcoming discounts for the PlayStation®4 system, please continue to visit the official Mana series social channels on Twitter and Facebook.

Originally released in Japan as Seiken Densetsu 3 in 1995, Trials of Mana is a full, high-definition remake of the third entry in the classic Mana series. The game immerses players in an unforgettable adventure filled with exciting gameplay, memorable heroes and villains. Players will craft varying experiences by selecting a party of three from six unique characters as they embark on the adventure of a lifetime, upgrading their characters’ classes into more powerful forms, learning over 300 different abilities, and discovering a world of secrets and mysteries to explore. Additionally, players can discover an exciting new playable chapter after finishing the game not found in the original release, in which they can unlock brand-new classes, and challenge a powerful new threat.